Can I be arrested (or ticketed) for not wearing a mask in South Carolina?

Many cities in South Carolina, like they did with social distancing at the start of the coronavirus pandemic, are considering (or have already passed) city ordinances requiring the use of face coverings in certain locations inside the city limits. Greenville, Clemson, and Columbia have already passed such ordinances, and Spartanburg just voted to pass an ordinance this afternoon.

Are cities in South Carolina allowed to require people to wear masks?

As of right now, in general, yes. There is no state law that preempts cities from passing mask ordinances. That means it is up to individual cities to decide what they want to do. If the state legislature passes a state law that limits what cities can do, then that might change, but for now, cities have the green light to pass ordinances as long as they are not arbitrary or infringe on constitutional rights.

What about Spartanburg? Where do I have to wear a mask?

Starting at noon on Monday, June 29, masks will be required by anyone who enters grocery stores, pharmacies, public transportation, and government buildings/facilities in the city limits. They will also be required by employees of restaurants, retail stores, salons, barber shops, and pharmacies “while having face to face interaction with the public.” Exceptions will be made for those with underlying health conditions that are unable to safely wear masks or remove them without the assistance of others.

How are these ordinances enforced?

Every ordinance that I’ve read, including Spartanburg’s, imposes a civil penalty of a fine somewhere between $25 and $100. These are not criminal penalties, and jail time is not authorized as a punishment. Columbia’s City Manager stated that its police department will not be enforcing this law, and that it will be up to various city employees to give warnings and issue citations if necessary.

So I won’t go to jail? How can they make you pay the fine?

Each of the ordinances I’ve read mentions the possibility of the City declaring “repeated violations by a person or business” to be a “public nuisance,” which can be enforced by injunctions and restraining orders. Hypothetically, if someone drags out noncompliance long enough, a judge could punish them with contempt of court and order someone to sit in jail. But a lot of steps would have to be taken to get to that point, and it’s hard to imagine that happening. My guess is that individuals won’t really be the ones targeted by these ordinances, but businesses and stores that get too permissive with looking the other way when people don’t wear masks might risk getting shut down, like a health code violation.

Where can I find out if my city has passed an ordinance?

Here’s a few direct links to some of the city ordinances:

The best way to see if you city has passed an ordinance is to visit their webpage and/or social media–if they’re considering it, it’s probably up there right now, or it will be soon.

I heard that I can’t carry my concealed weapon while wearing a mask. Is that true?

No, at least not in South Carolina. This is a social media rumor that was directly addressed by our state Attorney General’s office and SLED. As long as we’re talking about masks that are worn to comply with city or county ordinances to stop the spread of COVID-19, and not masks that are worn with the intent to conceal your identity, you’re good.

What rights do I have if I get a ticket?

The Constitution doesn’t give you a right to a jury trial on civil infractions that are only punishable by small fines. But South Carolina statutory law does give you a right to a jury trial on any offense charged in a municipal or magistrate court. Since violations of mask ordinances would not be a criminal offense, it’s a little unclear whether you would be afforded the same rights as in a criminal trial (the right to remain silent, the right to an appointed lawyer if you can’t afford to hire one, the right to cross-examine witnesses, etc.), and I imagine individual courts could probably take a lot of different approaches to how they would conduct the trial.

So, what’s your hot take?

I’m glad these ordinances haven’t been written to be enforced with criminal penalties. I don’t think the criminal justice system is the best way to achieve a change in social behaviors, certainly not on short notice like this, and not when people already have strong opinions about the issue. I also don’t really see the point of targeting individuals with these ordinances – if cities want to take measures like this, the focus should be on compelling the businesses to encourage wearing masks. I don’t think this will really do much to stop the spread if county laws don’t also change (Don’t want to wear your mask to Wal-Mart? Well, Target is just outside the city limits…), and even if it helps stop the spread at some locations in the city, I worry that it’ll just be a drop in the bucket.

Personally, I’ve been wearing mine to every court appearance for the past couple of weeks (except when I appear over video-conference). Most defendants and visitors to the building wear them. Most everybody else doesn’t. About a month ago, I heard a prosecutor say “they better not make me wear a mask.” Several sheriffs in North Carolina have gone on record to state that they will not enforce statewide mask laws. So take all that for what you will. 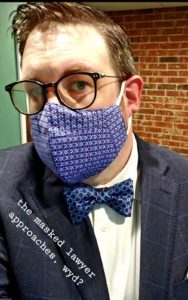 Next PostCity of Spartanburg Passes "Stay at Home" Ord...